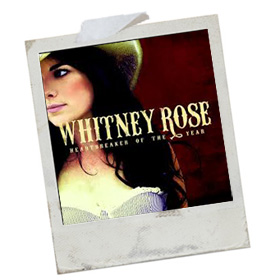 Booty-Scootin’ Country Songs; Like They Say Aren’t Made Anymore

A couple of weeks ago I had to walk away from a discussion/argument about the current state of Country Music. My argument was along the lines of “Stop living in the past, dig deep and it’s there waiting for you.”
Subsequently I went to the SummerTyne Festival where I finally saw the Shires and Ward Thomas, plus discovered Chloe Chadwick and Jess and the Bandits proving that (Classic) Country Music is not only alive and well but actually in rude health at the moment.
Then the icing on my Country Cake was when this disc arrived through the letterbox.
It appears that young Whitney has wrote the majority of songs here; and from the opener Little Piece of You, it’s evident she is talented way beyond her years. It doesn’t matter if her songs are from things in her life or her imagination; she has a mighty fine way with words and…..boy……what a voice!
All of the songs here have more hooks than a fisherman’s basket making them very ‘radio friendly’, which still counts for something these days.
In these days of cynicism in songs and attitude it makes a refreshing change to listen to a whole album that sounds like the musicians are smiling as they play a set of songs that are designed to make you tap your toes or actually dance (age dependent of course).
I would be more at home dancing to the waltz like Only Just a Dream, which my early notes mentioned Whitney sounding like Lynn Anderson. Sadly Ms Anderson died yesterday. How weird is that; but I stand by my original sentiment.
My favourite song, above all others is the Alt.Country title track Heartbreaker of the Year which has some scarily edgy guitar playing straight from the Richard Hawley/Johnny Marr book and who doesn’t like a song littered with finger-clicks?
If I was asked I would certainly point the Record Company towards The Devil Borrowed My Boots Last Night as the first single. It has everything Country Music fans like. The pedal-steel is on fire, the guitarist must have studied at Chet Atkins feet and the organ playing sounds like Booker T in double denim. All that would be for nothing without a melody/chorus/story sung by a voice that will make grown men go weak at the knees while the ladies dance their hearts out.
The only two songs not written by the young Canadian are the finale Hank’s There’s a Tear in My Beer which she does double-justice too and the other is the only flaw on the record.
I’ve somehow managed to get this far without mentioning the fact that the ‘band’ are pretty much The Mavericks and their legendary singer Raul Malo is the Producer and what a great job he does too. It didn’t go unnoticed that his occasional harmonies are exquisite; but……their duet on Be My Baby doesn’t fit in. While it’s a very good song in its own rite and had it turned up on a Mavericks album or better still a Raul Malo solo project then fine. But it’s not and Raul goes all ‘Placido Domingo’ showing what an amazing range he has and ending up smothering Whitney Rose’s voice.
That apart this album hasn’t been out of the CD player for four days; much to the detriment of a big pile of CD’s in need of reviewing.

2 thoughts on “Whitney Rose – Heartbreaker of the Year”