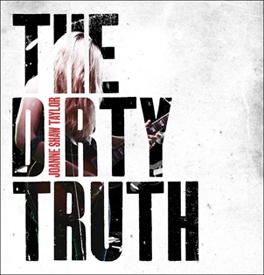 The lady truly sings the Blues and plays some mighty fine guitar licks at the same time.

I’ve desperately wanted to be more of a fan of Joanne Shaw Taylor ever since a friend introduced me to her music round about the WHITE SUGAR album; but while I could always see the merits in her guitar playing; and not just because she is a ‘girl’ but in my head I’ve always thought she was a better singer than people or even Joanne herself gave her credit for.

On this, her fifth album it appears I’ve been vindicated as Jim Gaines clever production allows her excellent guitar playing to compliment  the well-crafted songwriting by using Joanne’s gruff (and occasionally sexy) voice as the lead ‘instrument’ for once and, it has to be said, the end result makes for her best album to date.

‘Mud Honey’ which opens proceeding starts with a Rory Gallagher style riff and the voice that follows is a lot fuller and more mature than on previous offerings and the deeper than usual lyrics set the tone for the tracks that follow.

On ‘Wicked Soul’ Joanne’s searing guitar is neatly supported by some dirty keyboards from Rick Steff as Joanne purrs and pouts as she pours her heart out about a recent broken relationship.

I guess it’s only a coincidence but the Texas style shuffle of Outlaw Angel sounds uncommonly like Johnny Winter who died only a couple of weeks before I received the album; and that’s no bad thing in my book.

What I especially like about MUD HONEY is that Joanne is taking risks by including slow Soulful ballads like ‘Shiver and Sigh’ which might send the guitar aficionados to the bar when played live; but the sheer hurt she conveys in her  voice has the potential to bring her a legion of new fans who love a good Blues singer.

With guitar players it’s always fairly easy to play ‘spot the influence’ and in this lady’s case you can tell she’s listened intently to all of the great players from Hendrix and Beck in the 60’s through Rory in the 70’s and Stevie Ray and Billy Gibbons in the 80’s but her voice hardly bares comparison to anyone that I can think of and that USP will hopefully be what sets Joanne Shaw Taylor apart from the rest of a very crowded market place as a truly great Lady of the Blues.