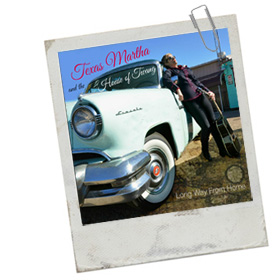 Texas Martha and the House of Twang

The Band You Dream of Stumbling On in a Nashville Bar.

I just knew that I was going to love any band called Texas Martha and the House of Twang; and if you’ve read this far I’m pretty sure you will too as it is exactly what it says on the tin!

Texas Martha is Marty Fields Galloway, a native of Austin TX and now holed up in Bordeaux France; and her band is made up of some pretty serious players who have played with some real legends.

Although I’d secretly hoped that opening track Born to Boogie would be the T Rex hit; I was still bowled over by the Old School 90mph Classic Country tune that came roaring out of my speakers. A belting tune is made even better when halfway through Marty goes into Franglais/Cajun but with a heavy American accent, for a couple of choruses. Her fluent French actually comes into play later on her love song to her adopted home city with Streets of Bordeaux.

The songs come thick and fast and will provide the perfect soundtrack for family BBQ especially the Honky-Tonk stomper Take You Down and the dreamy Where The Red Grass Grows.

Don’t think for one minute this is a bog standard Country boogie album; which is certainly the veneer on the top; but if you dig even a tiny bit deeper you will find some serious messages under that fragile layer.

It’s all too easy to let Marty’s voice and the Lionel Duhaupas’ glorious pedal-steel wash over you on Lover’s Lane; but the story is just as sharp and personal as Springsteen’s The River if you listen carefully.

On Do As You’re Told; I found myself singing along with the lightweight chorus the first couple of times I heard it in the car then the Twang fuelled fog lifted and the words hit me square between the eyes like a heavyweight’s huge fist. I won’t spoil it for you; find it and you will find a song that I haven’t heard the likes of since I first discovered Loretta Lynn’s back catalogue. Trust me.

Thankfully the album closes soon afterwards with a real Roadhouse drum thumper in Gotta Move which has some scorching guitar licks coursing through its veins as Texas Martha let’s rip in her quest to become the Queen of Country music; or possibly the Queen in exile?

Just when you thought Country Music had lost it’s edge Texas Martha, Sounding a bit like Lucinda Williams’ country cousin fronting the Tennessee Three has come along and not just blown the dust off our beloved music; but given it hefty kick up the backside at the same time.