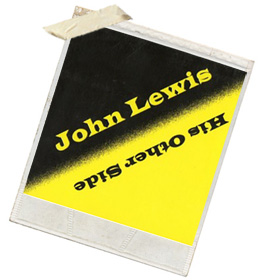 John Lewis
His Other Side
Atomic Cowboy Records ACR008

The Tender Side of Rockabilly

I’ve seen the John Lewis Trio play live three times and boy can they kick up a storm! So when I heard that John was recording an acoustic solo album I was more than a little bit intrigued; as his normal shows normally start at 100mph and get faster.
Well; the result is quite astonishing. John bares his heart and soul in the best traditions of Classic Country music, much in the style of Frankie Laine, Lefty Frizzell and Sun-era Johnny Cash.
The album opens with the delightful Waltz Around the Kitchen; which Lewis originally wrote after doing that very thing while trying to get his young daughter to sleep. The melody and harmonies are fabulous and it was only by reading the liner notes that I found that the latter were provided by the one and only Miss Imelda May; and she doesn’t sing back-up for just anyone.
They always tell prospective songwriters to “write what you know about” and if that’s the case Lewis has had a helluva life! Hopefully many of the songs here are from his vivid imagination. Second song in Money Troubles is exactly what it says on the tin. The song detailing two lovers barely getting by is littered with exceptional lyrics that only someone who has lived through that situation can write. ‘It don’t take much to heat our house/when it’s a hot day’ and ‘Our bank account is always full/for a minute on pay day’ to pick just two prime examples.
If I’m pulling lyrics out of songs I must also mention It Hurts, because I smile and grimace every time I hear the opening lines ‘I wish I had an umbrella/To stop the pain life throws at me/But like the rain in Wales/It comes horizontally!’ I’ve been there physically and metaphorically. The man really has a way with words and isn’t afraid of a melody and a stanza which is becoming increasingly rare these days.
In many ways His Other Side is a break-up album, as most songs use that as a theme in one way or another. But when you listen intently to Life Marches On and Sanity which close the record you will fear that it may even be a breakdown album; as the way John expresses his hurt you will fear for the outcome of the narrator.
We now have to jump back to a song hidden away in the middle that could get passed by casual listeners; but it piqued my attention and eventually took my breath away on subsequent plays.
Cardboard Carpeted Doorways is one of the saddest songs I’ve heard and I don’t think I’ve heard another song about children being put into a care-home since Nobody’s Child; and this one is just as much a tearjerker and deserves a much wider audience than it will probably get.
John’s intricate guitar playing seamlessly flits between Rock & Roll and Classical without you noticing and his Country Twang makes some very uncomfortable subject matter easy on the ear; which is a rare talent indeed.