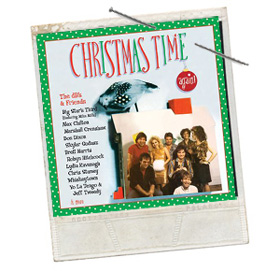 A Very Cool and Hip Time For All.

I love Christmas song. No; I’m not being ironic; I really do.
From Son #1 being a year old it’s been a tradition in the Magpie Homestead to play the Phil Spector album on repeat while we open our presents on the morning of the 25th then I supply a never ending mix of home-made cd’s (originally cassettes) of novelty songs from artists as diverse as Dolly Parton, Slaid Cleaves, The Jackson 5 and Bing Crosby; but with added leftfield variety for my own amusement.
So, it was with great glee that I received this delightful little present in August!
It’s always exciting for me to stumble on Various Artist albums, as I know there will always be a diamond hidden in there somewhere; but what will it be this time?
The album opens with a tasty slice of Indie soaked Power-Pop from The dB’s themselves from the original EP that begot this release, several versions later; with Christmas Time. OK, it’s not Wizzard; but it is a fun ditty and will probably make the afternoon disc in Casa Magpie.
More up my Lapland Street is track #3; (It’s Going To Be a) Lonely Christmas, featuring Marshall Crenshaw crooning like a latter-day David Cassidy.
Ooooohhhhh! I’ve never heard of Skylar Gudasz but her crystal clear; and slightly tear stained voice and haunting piano makes The Sounds of Christmas my first ‘diamond’ on the album. Certainly someone to check out for future reference.
Several ‘household names’ make appearances here too; with my interest piqued very early by Whiskytown singing Houses on the Hill. Not a traditional fun Christmas band by nature; but this cut is as deep, dark and interesting as you’d expect but oddly worthy of its place here; because nobody likes being happy all of the time; do they?
Much like the earlier Skylar Gudasz track, Lydia Kavanagh throws a delightful curved-snowball with It’s Christmas; a near Modern-Jazz song that needs to be heard while drinking egg- nog as the children sleep the sleep of the just.
The tempo finally cranks up when Yo La Tengo (featuring Jeff Tweedy) make an appearance with a live version of Eight Day Weekend. Sticking out like a sore thumb here; it’s still a glorious Sup-Punk ode to the holidays.
Oddly there aren’t many traditional songs included; but Don Dixon riffing on I Saw Three Ships is a Jazz delight from start to finish; and has already been added to my Christmas Evening playlist between Nat King Cole and Bap Kennedy.
Another trad song, In The Bleak Midwinter by Birds and Arrows is a nod in the direction of the 60’s Folk Groups and all the better for it.
My biggest surprise is definitely Alex Chilton’s straight as an arrow, Middle of the Road version of The Christmas Song; and at last I can hear why so many love his voice.
Another song I couldn’t wait to hear was Jesus Christ by Big Star featuring Mike Mills from the REM’s. Sadly it’s as dull as ditchwater.
Which isn’t the case with the left of centre You’re What I Want (for Christmas) by the dB’s Chris Stamey and and the delightful Cathy Harrington.
If I thought that was left of centre; Robyn Hitchcock reading a short dark, ghostly story called The Day Before Boxing Day is truly excellent, but should have closed the album.
The final two tracks, an instrumental called It’s a Wonderful Life by Chris Stamey and finally Remember (Christmas) by Brett Harris probably have their hearts in the right place; but are more or less filler, as the album would have finished on a high with Robyn Hitchcock.
Not necessarily ‘LOL’ fun; but this extended version of the original 1986 RP is generally a welcome addition to my Christmas album collection; but at 22 songs, probably 4 or 5 too many.