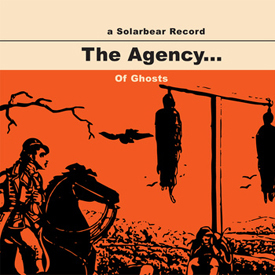 Prog-Country for the modern generation

As a fan of the Agency I’ve been privy to the development of some of these fabulous songs over the last year and hearing them pieced together on a damn fine stereo system is like solving a Rubik’s Cube.

Each song; in their infancy were small novella’s set to dark music; but the shroud has now been lifted and when listened to in one sitting, Of Ghosts is a genuine Long Playing record and sits alongside Leonard Cohen’s early work or mid-period Nick Cave as a work that needs to be taken seriously.

The opus She which opens the album received national airplay, when released as a single and is possibly the most commercial song here; sounding uncannily like it could be the soundtrack to a Quentin Tarantino Cowboy film.

As the songs come and go things get darker and more serious with Border Song being a slow and hypnotic waltz and lyrics that are biting and rattlesnake sharp. Fast took me by surprise as it took a few intense listens to unravel the story and when it does the subtle political message will take your breath away.

Another song that got late night radio play around Christmas time is Sad Parallel and you can understand why as a minimalist and piercing backing track allows singer Steven K Driver to marry he styles of Richard Hawley and Billy Bob Thornton to create an eerie sound that deserves a huge audience.

For the Daughter is a diamond of a song; slow, cautious the most literate song I’ve heard since Lloyd Cole and Sting were at the pompous best in the 1980’s.

Of Ghosts ends with the acoustic Jack and Spade which could have been quite pedestrian if it weren’t for some bottle neck guitar playing the shadows the lyrics like a hyena waiting to go in for the kill.

This isn’t a record to listen to for fun on a sunny afternoon or as background music at a dinner party; but something to get your teeth and ears into, late at night.