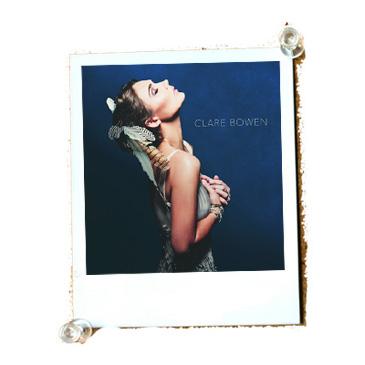 Regardless of what the Cool Kids thought, me and Mrs Magpie thoroughly enjoyed the Nashville TV series; OK it was more a Soap Country than a hard hitting look at the underbelly of Music Row; but what did you expect on Prime Time TV across the globe?
Without a shadow of a doubt our favourite character was Scarlett; the slightly neurotic singer-songwriter who was constantly looking for love. If you watched the show you will know that Scarlett; or more to the point Australian actress Clare Bowen had a beautiful voice and could deliver a heart wrenching ballad like few others in the show; and now it appears…..real life.
Which oddly enough; brings us to Clare’s debut self-titled album.
Opening track, Let It Rain has already been released as a single; and it’s exactly what you would want and expect to hear from this talented actress and that’s a good thing as it really is a Classy modern Country/Singer-Songwriter hybrid that fits into both Mrs. Magpies collection and mine too.
If there are surprises here, it’s the slower and softer songs where the production leaves Clare Bowen with nowhere to hide; as if she wants to anyway. I’m pleased to say she sounds a lot more confident than her alter-ego on Tide Rolls In, which gently builds to a big ole climax and later on the delightfully delicate Grace of God and  You, she sounds a bit like the young Dusty in Memphis; but without the overpowering string arrangements.
Her choice of songs here is quite excellent from start to finish; mingling the Folk tinged Sweet William with the cinematic Doors & Corridors then the intricate Lijah and the Shadow, which sounds like it owes more to East Nashville than it does Music Row, as does Lullabye which is a brave inclusion on such a high profile release.
Choosing a Favourite Track has had it’s challenges; as Let It Rain is a great Country single and well worthy of its chart success; but the challenging Warrior which closes the record very much has its merits and was my pick; but Mrs. Magpie went slightly off piste with her choice; the heartbreaking duet All The Beds I’ve Made, (with fiancée Brandon Robert Young?) as it’s a lot ‘deeper’ than her usual choices.
To a great extent this is exactly the album I’d have expected from the character Scarlett O’Connor; but the big surprise is that Clare Bowen delivers the goods with class, cool and most of all she sounds like she was actually born to do this, and not all actors can make this transition so easily.