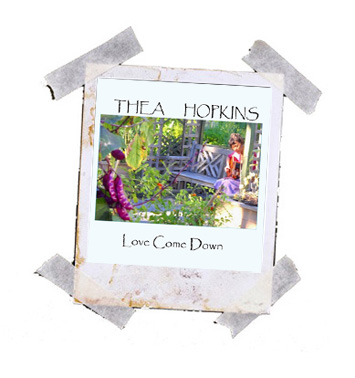 Distinguished, Articulate and Most of All, ‘Grown Up’ Folk Music.

Sadly I knew next to nothing about Thea Hopkins, save she was a ‘Folk Singer’ of some sort, as that’s where I think I’ve seen her name on festival guides of the years; but one listen to the title track Love Comes Down and all of my expectations were turned upside down!
Yes; this could be filed under ‘Folk’ in a record shop, but only if Leonard Cohen, Joni Mitchell and Joan Armatrading were there too.
Here I am, over a month later sitting all alone in the July sunshine listening to this captivating 6 track EP/LP and I’m lost for words as to how to describe Thea Hopkins’ voice and singing style; which is very much how and why she stands apart from her peers.
Haunting?
Pearlescent?
Ethereal?
Husky?
Expressive?
All of the above; and her storytelling on this love song is glorious too; and slide in a steely trumpet voluntary that would do Chet Baker pride and you find yourself helplessly falling in love with the power of music all over again.
This is followed by The Ghost of Emmett Till; which is in a similar haunting manner and re-tells that horrible story in a majestic manner that still fits the mood in certain parts of America to this very day.
Next up, Mississippi River, Mississippi Town takes you not just by surprise as it’s a deep, dark Americana ‘sound’ with some intricate banjo picking and something called an ‘electric ebow’ which really creates a dusky atmosphere on a story about a storm and imminent flood that could devastate the area.
Tom Halter’s trumpet makes another appearance on Almost Upon a Time and this time is joined by some delightful piano from Tim Ray; on a song that needs to be heard with the lights turned down low or your eyes tightly closed at the very least to get the best from it.
Everything comes neatly to a close with the sixth and final song on this all too short album; Until Then is a rather beautiful grown up lullaby, which could easily be sung to small children; but more importantly an over worked and under appreciated lover too perhaps?
Which only leaves us Tamson Weeks; which takes the accolade of ‘Favourite Track’; not least because it fits in perfectly amongst the other five songs; but mostly because it’s a fabulous story of Thea’s Great, Great Aunt who was a medicine woman in the Aquinnah Wampanoag Indian tribe of Martha’s Vineyard; and this starkly atmospheric tale is a glorious way to remember what sounds like a fascinating woman.
As I eluded to at the beginning, this is eloquent ‘grown up’ music in the manner of those three songwriters I mentioned and as I type Tim Buckley and Nanci Griffith spring to mind too.
Now all I need to do is find the time to explore Ms. Hopkins back catalogue as my musical appetite has most certainly been whetted by these six songs.