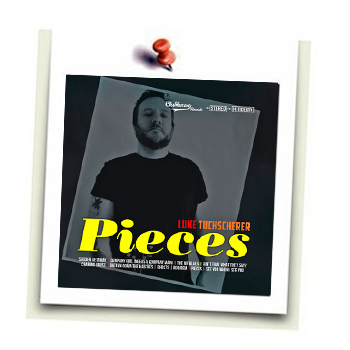 Roof Down, Wayfarers on, Press Play…….

The exotically monikered Luke Tuchscherer’s previous album came to us straight out of left-field a couple of years ago; a SE England lad living in NYC and playing Americana with a side order of Country Rock shouldn’t add up; should it? But it certainly did; and I’m pleased to say……still does.
Just as I was leaving the house the postman handed me three packages, which I opened in the car. The first was this CD, and knowing I’d liked that previous album put it straight into the stereo.
Yes sirree Bub! The fizzing and feisty opening track Sudden Getaway was the start of a perfect soundtrack for last minute drive to work in the British sunshine. Wayfarers on and a delightful dose of Anglo-American Country Rock blasting out of the windows as my right foot was pressed firmly to the floor; what’s not to like?
Company Girl (Needs a Company Man) follows and my mood just got better; as a swirling organ, luscious guitars and a delightfully flat vocal took me into Neil’s Trans/Freedom and Steve Earle’s Copperhead Road arena and there we stayed for the next half hour.
Stay with me here; this isn’t no homage to Neil or Steve or anyone in particular by any stretch of the imagination; as subsequent plays reveal many other lines of enquiry; but those fuzzy guitars and razor sharp observations will appeal to the rockier end of the Americana world that Neil made his own decades ago.
Tuchscherer has his very own way with lyrics; with Batten Down The Hatches being a straight forward song about preparing for the stormy season…..or is it? Could it be a clever song about the political situation in his adopted country? Only he knows; and we can guess.
After half a dozen exciting songs based around the electric guitar we get Ghosts, a wonderfully atmospheric acoustic road song with a man reliving and revisiting his past as one chapter in his life closes; and hopefully another brighter one is just around the corner. It’s a very clever and articulate song; that was an early contender for the Favourite Song accolade.
I love the way Luke straddles the Country Rock and Americana boundaries with no shame whatsoever; as good music is just that……good music.
That first day PIECES fit my mood perfectly well; but subsequently songs have unravelled revealing some very interesting stories masked by that fantastic band. Requiem is a pseudo-political tale about the have and have nots in our world, and the anthemic title track Pieces which follows is another punchy view on the world we live in with my favourite line of the week,
“Some Folks are born/but never live.”
Ain’t that the truth!
Then there is the song that actually takes the title of RMHQ Favourite Track; See You When I See You (For the Whybirds). A love song to Tuchscherer’s former band The Whybirds who were a staple of the nascent Alt. Country scene before it had a name and certainly long before it became cool. Just like that band itself this song will go over the heads of many who hear it; but for many of us and it’s fair to say members of any other band who hears it will get a tingle in the tummy and a tear in the eye.
“Don’t look back/never look back.” Don Henley once sang; but sometimes you have to, to move forward and with this beautiful song Luke Tuchscherer can and will move on to the next stage of his burgeoning career and hopefully get the success that his former band deserved, but never received.
Just like that last album; PIECES is something you can listen to on many levels; background music in the car, a soundtrack to a cool BBQ or better still on headphones when no one else is around.
Tip-top.