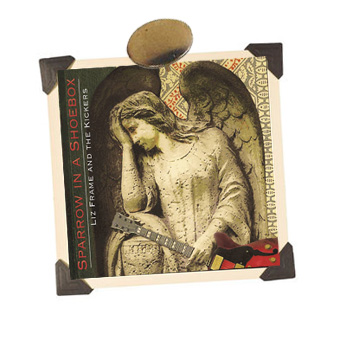 Liz Frame & The Kickers
SPARROW IN A SHOEBOX
Opt Records

File Under Country, Folk and Americana.

If I’m being perfectly honest I struggled to get my head around this album when I first received it; not that there was anything wrong with it, just that I needed a fix of louder music…..Bluesy stuff to make my feet move and my heart skip a beat.
That said; I always knew I’d come back as there was something in the way Liz Frame sings plus the songs themselves sounded like I needed to listen deeper than I was capable of at that time.
Now I’m ready to kick back and let Liz Frame and the Kickers win my heart and soul without much of a fight.
The title track Sparrow in a Shoebox is the first thing you’ll hear and if you’re not careful it will make you go weak at the knees. A delightful mix of Rootsy Country and classy Folk music; I was instantly reminded of those early Mary Chapin Carpenter records I still cherish and perhaps even Nanci Griffith in the way Liz both writes and sings.
In a good way there’s a little bit of everything here; from the gutsy Folk and Roll of Lookin’ For a Lonely Man which really showcases Patrick Chamberlin’s guitar skills; through the the heartbreaking Tex-Mex ballad Ungrateful Girl and coming out the other end with a gentle Rocker for people of a certain age, Grown Children; which will have fans tapping their toes to the melody while nodding along in agreement to Frame’s very perceptive lyrics.
In between the band slip and slide seamlessly between Grown Up Country song What You Gonna Do When I’m Gone? and the intense Little Brown House; which again will tug at the heartstrings until you fall under the Boston songwriter’s spell.
Now I’m sitting in the sunshine wallowing in this delightful discovery; two songs really, really stand out and therefore tie for the Favourite Song Award; the deceptively simple She’s Made of Light and Love is one of those songs that will spin your brain as it unravels each and every time you hear it.
The other is I Used To Be Your Slave; and again Liz and the band mask a harrowing tale with a jaunty tune; but the message hear is much clearer as she takes the role of a woman leaving an abusive relationship.
SPARROW IN A SHOEBOX just like those early albums by Nanci, Lucinda, Mary and Emmylou could easily be filed under both Country and Folk but more likely these days under Americana; with fans of all stylea finding plenty to like and indeed love here.
Let’s just hope it’s not another 7 years wait for the third album from Liz Frame and the Kickers; as that’s how long her fans have waited since her debut in 2011.

One thought on “Liz Frame & The Kickers SPARROW IN A SHOEBOX”