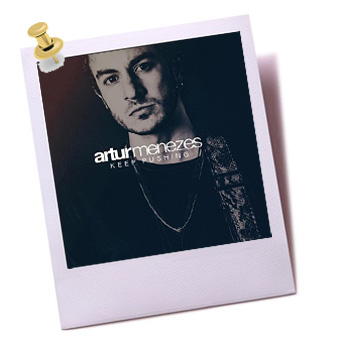 A New Star For the Languid and Soulful End of the Blues World.

As usual I’d played this album two or three times before glancing at the accompanying Press Release and I’m mighty glad I did; because Brazilian guitarist and singer-songwriter Artur sounds quite dull when you read he is a ‘lead educator in The Blues’ and ‘co-founded a Blues Society’ but the music he creates is anything but dull!
There’s more than a sweet hint of BB King to the rolling opening track Now’s The Time which has a gripping story embraced by a swinging big band and some truly electrifying guitar solos from Menezes.
The Brazilian switches pace and style on the title track Keep Pushing which follows next; with some courageously jangly guitar breaks over a smoking Soulful backbeat that had me shuffling along in the living room the first two times it came on.
Obviously I love a good guitarist; it’s what I grew up listening to and Artur Menezes is up there with the very best at the moment; but KEEP PUSHING is chock full of exceptional songs if you get past his exceptional way with the magic box and listen to his words.
Should Have Never Left is a mighty cool ‘what if’ story that wouldn’t have sounded out of place on Atlantic Records in the 1980’s and Give My Money Back also follows a Dark Soul path that only ever leads to t.r.o.u.b.l.e. and yet again I hear the ghost of BB King in not just the guitar licks; but the song itself.
The more I play this record the more I get from it and the more I’m impressed by each and every song, which nod to the past greats but generally takes those influences and fleshes them out in a new and very contemporary fashion……..Love ‘n’ Roll could have gone in a few different directions; but Menezes teases you with a heady mix of Blue Note guitar and organ but makes his song swing like a Tom cat on heat. Then there is Any Day, Anytime which started off like a homage to Robert Cray and George Benson but ends up being 100% Artur Menezes as the lady he’s singing to and about will surely testify!
There’s no longer any need for Singers like Artur Menezes to find a single for radio play; leaving them the freedom to let the songs take on the life nature intended and join together to make a cohesive long playing record; which this most definitely is; but there is one song in particular that stands out and easily became the RMHQ ‘Favourite Song’ and that is the beautiful Can’t Get You Out of My Mind; which funnily enough is a lot less dependant on the Brazilians’ incredible guitar skills than anything else and allows his velvety to voice to seduce all of us in the way singers like Brook Benton or Jeffrey Osborne have effortlessly managed for decades.
Late night lovers have a new theme tune!
Sooner or later someone will call their album 50 Shades of Blues, as I seem to say most weeks that The Blues does come in many many, different hues; each with their own merits but managing to divide fans like few other genres can.
Me? I’ve slowly grown away from the loud and raucous Blues Rock world and now find myself preferring to sit back and wallow in the more languid and soulful end of the Blues world; and it appears this Brazilian Guitarist and singer-songwriter is about to become something of a ‘go to’ guy at RMHQ when I need such a fix.