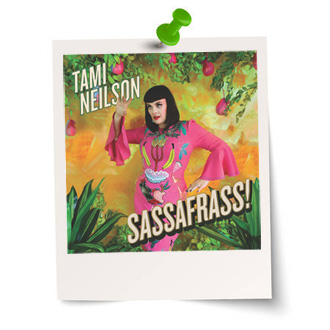 I suppose with hindsight I should have expected to hear what I first heard a couple of weeks ago just by the amazing cover to this Album from New Zealand’s Tami Neilson; but in 2018 who among us could expect a blistering ‘Show Tune’ like Stay Outta My Business? It’s part Rocking Blues, part Soul Sister Extreme and part West End on a hot Saturday night.
Then of course some time later the actual storyline knocked me sideways.
What a combination!
That ‘Show Tune’ meets Rockabilly feeling continues on the next couple of tunes, starting with the crazy Bananas which has had me doing a Carmen Miranda style dance in the kitchen twice (that I’m admitting to) then Tami becomes a sex-kitten in the manner of Eartha Kitt on Diamond Ring.
This is only the first three songs and I’m so hot, I find myself fanning my face with the album sleeve to cool down.
I don’t know if it’s a good thing or a bad thing; but Tami then moves across into a Country Siren on the Bobbie Gentryesque A Woman’s Pain, at #4; a Gothic tale of a woman done wrong and left to live with the consequences; and oddly enough is a true story about Tami’s own Grandmother.
The first time I played SASSAFRASS this left turn really confused me; but when you listen to the whole album it really is akin to a soundtrack to a Romeo and Juliet style Southern Love Story, with the songs all generally linking into each other even if they do cover a number of different styles.
There’s even a red hot Blues tribute to and in the style of the late lamented Sharon Jones; Miss Jones is destined to get even the most leaden of male feet onto the dancefloor; even mine; and Devil in a Dress will keep you there but clinging on tightly for a slow smooch.
With so much to choose from it’s been really, really difficult to select a genuine Favourite.
The sleazy and sultry Smoking Gun certainly has it’s merits; as does the lovely and gentle on the mind Manitoba Sunrise at Motel 6 (the homage to Glen Campbell) but I’m going for the rip-roaring Kitty Cat which is the type of rocking and rolling Rockabilly song that the album cover and title SASSAFRASS! put me in mind of even before I’d heard a note.
Don’t worry, there are love songs here too; with One Thought Of You being the sort of classy song that Elvis or Connie Francis would have recorded back in the day; and would still make you swoon if it came on the radio tomorrow. The album closer, a heartfelt Good Man, is in a similar vein but a lot more contemporary and a perfect way to close the ‘show.’
There’s a whole lot going on here; not least Tami Neilson’s amazing voice; boy oh boy can she sing a song! But her songwriting can’t be underestimated either; as each individual song has a strong tale to tell and deserves very close inspection; but overall this is just a damn fine record.

One thought on “Tami Neilson SASSAFRASS!”