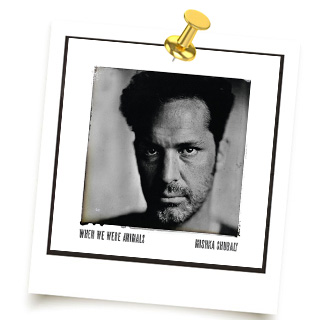 Mishka Shubaly
WHEN WE WERE ANIMALS.
Self-Release

Mishka Shubaly’s previous release the cathartic COWARDS PATH (2015) was pretty much as left of centre that I’m allowed to play out loud at RMHQ; but even then Mrs. Magpie is still prone to raising her eyebrows and finding something else to do in another room.
Thankfully; not a lot has changed on the follow up WHEN WE WERE ANIMALS as opening track Forget About Me reignites that dark humour and when Shubaly sings/growls “I like smooth shiny girls/hard boiled/and loaded with sin” you know he’s not targetting the Ed Sheeran market.
I will say up front that the world needs Mishka Shubaly; as he is the perfect antidote for all of that anaemic music that has taken over the airwaves.
He takes chances that others are afraid to try; who else would dare to re-invent Willin’…….no longer is he a simple truck driving man; here he sounds like the type of guy the FBI have on their Wanted Lists across 12 States!
On World’s Smallest Violin he Rocks the Hell out of your speakers as his self-depreciating hard luck love story unravels in ways that will send a shiver down your spine.
For a Rocker Shubaly certainly has a way with words and at times is almost poetic; with the Waitsian Last Of My Kind and Death in Greenpoint going into recesses that very few songwriters would dare venture, for fear of scaring their fans away.
Shubaly relishes such challenges; running full pelt past the centre ground on the funklicious Wooden Crosses and later with Leaving Feels Like Flying. Both of which I have to listen in headphones for fear of scaring Mrs. M!
I doubt anyone else out there will choose a ‘Favourite Track’; even Shubaly’s Mother would think that would be a test too far of her love; especially the title track Animals, which I love, but…… after several plays I’m going for Never Drinking Again; partly because it’s the nearest thing here to being ‘commercial’ but hey……it’s a cracker; and more than anything else; we’ve all been there haven’t we? In another parallel universe Lee Marvin would star in the video which would be directed by Shane Meadows.
Just a thought.
WHEN WE WERE ANIMALS isn’t for the feint hearted and will be a challenge for just about everyone who hears it; but like some of the world’s greatest novels the bumpy ride and false endings are well worth the journey; and those who do get to the final lines of Death In Greenpoint II, “I feel like I’m gonna die in Greenpoint/Yeh I know I’m gonna go/With a head full of Blow/in a Polish disco…… in Greenpoint.” they will be so deeply in love with the record; they will think they know the meaning to life.
They won’t of course; but they will know something you don’t. Mishka Shubaly is a rare talent indeed and one that we need to cherish.