So far in 2018 I’ve listened to some amazing albums from artists across the globe, criss crossing all of the Roots genres. Two of the very best have come from long term RMHQ favourite Gretchen Peters and a new name to me, Kim Richey; so the opportunity to see both ladies at the magnificent Sage Concert Hall in Gateshead was too good to miss.
As I stood beside the stage, camera in hand I was surprised to see that people were taking their seats behind the stage on the third tier of Hall 2 meaning that this concert was very close to being a Sell Out…….which is a good thing.
A nervous looking, but smiling Kim Richey opened proceedings with a charming preamble to Chinese Boxes from her 2007 album of the same name, and the song itself was absolutely delightful; as were everything else she sang too.
I particularly liked her stories behind the songs; especially the self-depreciating one for Hello Old Friend/John’s Song which really made me and the crowd chuckle; then gasp at the power of the song itself.
With only 45 minutes to play with Kim slid in only a couple of albums from this years’ Edgeland and thankfully my two favourites, the brilliant Chuck Prophet co-write Pin a Rose and the darkly beautiful and autobiographical Wild Horses were among them; and the latter especially received long and loud applause from the knowledgeable crowd as it ended. 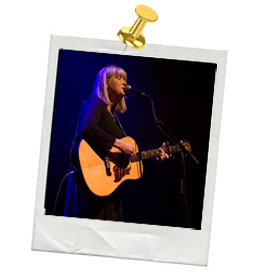 Although not something I normally do I’d intended saying ‘hello’ to Kim during the break; but the queue to buy her album and have a photo taken appeared never ending; so I slunk away back into the shadows like a Reviewer Ninja.
When I walked back into the hall, there was a palpable air of anticipation as the lights went down, and Gretchen Peters made her way across the stage.
I was very surprised that she chose the exquisitely dark and brooding Arguing With Ghosts and Wichita from her new album which only came out a few days ago to start the show; but the look on the audience’s faces as the latter ended proved what an excellent selection they were.
For the third song Barry Walsh left the Steinway piano to strap on a piano accordion and stalk the stage like a Parisian troubadour for the chillingly beautiful Matador.
The mood was set, for an evening of ‘sad songs to make everyone happy.’
With a back catalogue of songs that put all of her contempories in the shade; Gretchen chose to pretty much perform the vast majority of songs from the latest album Dancing With The Beast and, do you know what? They were all here on merit, trust me.
With Barry on piano and two young guys from Northern Ireland on bass and electric guitar; the arrangements of these new songs made Truckstop Angels and Say Grace even more haunting than on disc.
There was something that I’d tried to say in the album review that was even more evident tonight; Gretchen tells some harrowing stories on these songs and really and truly inhabits the characters she’s singing about; but giving these ‘feminist subjects’ a very feminine state of mind.

As I said there weren’t a lot of ‘older songs’ but those that were included were breathtaking; especially the Grammy winning Blackbirds and my personal favourite On a Bus Stop to St. Cloud, which was introduced with a story about Jimmy LaFave which sadly went over the audience’s heads.
Oh……another was Guadalupe, which I think I first heard sung by Tom Russell and was probably the first time I’d heard Gretchen Peter’s name; such is the nature of the world she and I inhabit.
Highlights? Flipping heck!
The title track from the latest album Dancing With The Beast is about a horrible subject; but tonight was delivered with majestic aplomb, leaving everyone dumbfounded until they nearly lifted the roof with their collective applause.
Kim Richey was invited back out to provide backing vocals and harmonies on a couple of songs; one of which; Gretchen got the key wrong and had to be stopped mid verse; much to everyone’s delight!

I’m normally not a fan of encores, as they are generally contrived these days, but tonight they were well deserved with Gretchen eventually leaving the stage to go ‘off mic’ to serenade the front row with an incredibly simple and intimate Love That Makes a Cup of Tea; (which was only spoilt by someone dropping a pin), and was the perfect way to end a perfect concert.