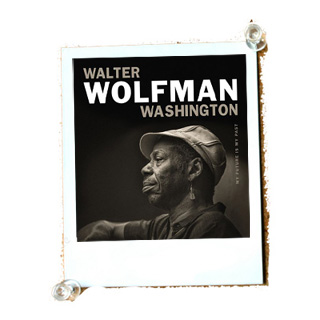 Walter Wolfman Washington
MY FUTURE IS MY PAST
Anti-Records

I’ve really had to rack my brains here, as I was sure a) I had at least one album by Walter Wolfman Washington (I haven’t) or b) I’ve seen him live (again, I haven’t as he’s never played the Jumping Hot Club) so why did I know his name and why was I excited at hearing this album?
AHA! One song………I have ONE song by him; but what a song! Ain’t No Love In The Heart of The City was the major surprise on a VA album on Point Blank Records way back in 1991……but I still remembered it; now to hunt it out of the loft.
But until then there’s this amazing record.
You first hear Walter pour a drink before strumming a semi-acoustic guitar on opening song Lost Mind; and when his velvet tones filter from the speakers your heart will melt. Is this the Blues? Is it Jazz? Is it Soul? Yep……all three.
Apparently this is a new direction for 74 year old Washington; but I can’t vouch for that (obviously) so I’m just going with what I hear; and I hear a man channelling not just Sam Cooke but Al Green, Ray Charles and Nat King Cole too on a bunch of intricately simple songs that defy categorisation.
She’s Everything To Me features some stunning piano and again on I Cried My Last Tear; but nothing deflects from Washington’s beautiful delivery of some beautifully timeless words.
This my friends; is the perfect late night album for both seduction purposes and also sitting alone crying into your beer; with Walter’s interpretations of Save Your Love For Me and I Just Dropped By To Say Hello being perfect for both situations.
Oh man, oh man……oh man how cool is What a Difference a Day Makes? Every other version of this song is full of sweeping and swooping strings; but here Producer Ben Ellman let’s the words breathe alongside some jaw dropping bass from James Singleton which sounds like it replicates Washington’s heart beats as he makes the song his own.
While there is plenty of Rhythm to go alongside the Blues here; Walter never really gets past a stroll of a pace; although he does pick things up to a sexy strut on Steal Away and Johnny Guitar Watson’s I Don’t Want To Be a Lone Ranger too.
MY FUTURE IS MY PAST is a good old-fashioned Long Player; without the need for a Radio Single; making choosing a Favourite Track more difficult than usual; as each individual song perfectly melts into whatever follows; but the spine-tingling duet with Irma Thomas Even Now does stand out like a blood red poppy in a golden wheat field; so that’s what I’m going for.
Everything about this album oozes ‘Class,’ not just the selection of songs but the world class musicians that have been assembled to support Walter Wolfman Washington’s amazing voice; but the Album Cover itself should be enough to make you want to buy it; as you really can ‘judge an album by the cover’ in this instance.
Trust me; even if you have a passing interest in Blues, Jazz or Soul and even if you don’t but appreciate great music; don’t miss this record you will thank me for the tip.