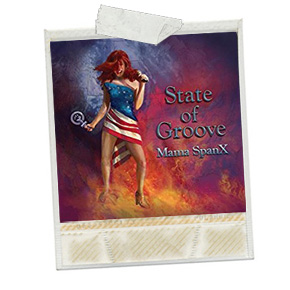 This album has very nearly gone into the Oxfam box twice in recent weeks; not because it’s no good but simply because it arrived in October 2017 when Mrs Magpie was rushed into hospital and I didn’t do any reviews for a couple of months and the 2018 pile of CD’s is growing like Topsy every day.
But……this is far too good a record to give away and in my humble opinion deserves a much wider audience than the hirsute hipsters of Jesmondia near Newcastle.
First of all I’m not too sure I like the striking artwork on the album cover; but in it’s defence it does ‘sum up the contents’ extremely well! What you see is what you get……a red, hot and timeless mix of feisty female Rhythm, Blues, Funk and S.O.U.L
With no preconceptions at all, apart from trusting the PR who sent the disc……..my stomach spun like a turbo fan the first time I heard opening track ROCKET!
Oh Lordy Lord….everything I love about R&B and Soul Music is here…..and MORE! Nikki Armstrong aka Mama SpanX has a warm, velvety and expressive vocal style and her band The Spankers (ooh, err Missus!) Rock, Roll and Swing like a cross between The Swampers and Count Basie’s Big Band……and that’s only a slight exaggeration.
Seeing me making a cup of coffee earlier Mrs. Magpie giggled “What are you doing?” As I was shuffling my feet and actually ‘shaking my thang’ as Wild Emotion filtered out of the office speakers on the other side of the house. Caught in the act; I kept on dancing regardless of how silly I looked; it’s that good a song and too good an opportunity to miss, regardless of the location.
When she wasn’t watching I secretly danced again to the Funkylicious Being Beautiful and Alligator Boogaloo and then again on the title track State Of Groove; because that’s what this music is for……DANCING and you will too.
Mama SpanX can get low down and dirty too by the way; with Crawl and Thinkin’ being the sort of late night Bluesy/Soul crossover that is perfect for both seduction purposes and also crying your heart out into your beer when it all goes horribly wrong!
Before I get onto my ‘favourite track’ I have to heap copious praise on the Spankers; without whom this album wouldn’t be half as good….Harlan Spector’s keyboard playing is exceptional and holds the whole sound together and the horn section ….Steve Sadd and Julie Sax make a big, big sound worthy of the best in Memphis; and Ross Mullen on a six string fretless bass (?) alongside drummer David Abercrombie combine to create controlled thunder in the background while Steve Johnson provides virtual lightning on guitars throughout.
As I say I love the dance tunes here; but the two songs that tie for ‘favourite track status are the Power Ballad Wrong Side of the Garden; which is a thrill a minute and promises to be a guaranteed showstopper when sung live; yet the other finds Nikki Armstrong singing the lyrics to the heart breaking Anywhere You Are over a very gently played piano. Simple, yet emotionally destructive……just like Soul music should be.
Where do I start and stop comparing the Mama SpanX ‘sound’? Classic acts as diverse as Tina Turner, Nina Simone, Tower of Power and even Sly and the Family Stone sprung to mind at various times playing this record; but so did RMHQ Favourites the James Hunter Six and of course the late lamented Miss Sharon Jones of Daptone Records fame……and Mama SpanX and the Spankers could easily sit comfortably in any of that company.