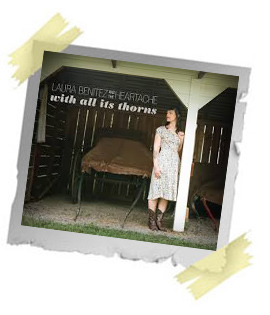 Laura Benitez & The Heartache
WITH ALL IT’S THORNS
Copperhead Records

Articulate Backroads Southern Country Music That Will Break Your Heart.

I’ve said this more than once over the years, but even in this Digital Age, good or at least interesting Album artwork is still a key to the overall experience of buying new music; and here is another case of a cover that would make me pick it up if I was in a Record Store.
Then, if I was to ask the proprietor to play the first track (as we did in the olden days) track #1; the sublimely titled Something Better Than a Broken Heart would easily make me part with £10.
Sounding uncannily like a young Laura Cantrell fronting the coolest ever Texan Country bar band. The song is a doozy; bittersweet and beautiful in equal measures and boy oh boy; can that band swing.
This is followed by the spine tingling Easier Things to Do; which shows Laura Benitez ain’t no one trick pony. A perfect song for when you need to turn the lights down low and stare at the telephone; praying it will ring and that ‘certain someone’ will be on the other end.
Oddly enough only yesterday I read an interview with a singer who mentioned a reviewer complaining that his album had ‘too many different songs’ on it; and I agree with the singer; how is that a bad thing? Here Laura sings some gorgeously deep ballads (In Red and the sparse Ghostship about a fire in a artists collective that caused the death of 36 souls) and balances these with a a very danceable Twangfest on Whiskey Makes Me Love You and The Fool I Am Right Now, which is surely Patsy Cline inspired, and to round things off there’s even a lovely, but sad Bluegrass song Nora Went Down The Mountain to close the record.
Then of course there has to be an RMHQ ‘Favourite Song’ and with so many delights to choose from I’m going for the one with the softest centre; and it’s another heartbreaker….. Our Remember Whens; which truly showcases her warmly translucent voice and The Heartache in all their majestic glory.
Often when I write about songs on albums by new artists to me, (this is her third album since 2010), I occasionally imagine them sung by major stars. That certainly isn’t the case here as Laura Benitez has a really special singing voice; which is perfectly matched for her own heart-shredding songs of love, loss and hope which must all come from the experiences of a life well lived.