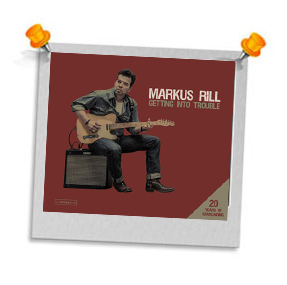 Our Favourite German Shows Nashville How Country Ought To Sound.

Until Markus Rill crossed my path 5 years ago the only German music I was aware of were the Krautrock proggers of my youth like Can and Faust; then Kraftwerk some years later; none of which tickled my musical taste-buds.
Markus Rill on the other hand is now in my Top 10 artists of all time; producing some great Americana/Alt. Country/Country hybrid albums that sit on the ‘go to’ shelf for when the newer discs I receive don’t inspire me.
This Double album (Double album? Yikes?) is sub-titled 20 Years of Gunslinging and combines a whole album of new songs with a few re-workings of his older songs with some delicious cover versions and a few co-writes that didn’t make it previously; and the clever part is; you can’t tell what is old and what is new.
The album of brand new songs kicks off with the rye and even tongue in cheek, kick-ass In Theory; a songwriters song about ‘why do I bother’ until he remembers the excitement of playing his own songs in front of an appreciative audience……plenty of my friends know exactly where he’s coming from.
First and foremost Rill is a clever songwriter, sometimes writing from his own experiences and at other times inhabiting characters; both male and female to tell a story; and very few in 2018 do it half as well as he does.
One great example on Disc #1 is On The Sly; a raggedly beautiful acoustic song about a young girl who gets pregnant just before going to College and weighing up her options while being unable to tell a single soul about her dilemma.
Who else do you know can write a contemporary song about Henry VIII? Well Markus Rill did with For The Love of Anne Boleyn which kind of sounds like a Folk-Rocking history lesson; but also Country with its story. Well worth a listen.
For straight up ‘Country’ look no further than Vassar Played the Fiddle; about hearing Phil Vassar for the first time and ‘needing’ to do the same.
On any other record the brittle Not Like I Don’t Try would easily have been my ‘Favourite Song’ but here it barely makes the Top 3 on Side #1!
#2 is Jenny; an a-typical Markus Rill song about a woman in his life, perhaps real perhaps not; but a wonderful tale of a ‘green eyed stripper’ in New Orleans. Country Music don’t get no rawer than this kiddo.
The #1 title goes to Trouble With The Law; a dark and almost Gothic slice of Americana that could almost be a modern day Cowboy song and is probably as good a song as our German friend has ever written and sung.

Disc #2 is full of the re-workings and starts with the punchy Young Again; which has echoes of the Blasters and perhaps even the Waco Brothers at times; but Rills trademark grizzled and lived in voice makes it his and his alone.
As I said earlier; and possibly because they have been re-recorded nothing on this disc sounds dated by a day; even the covers Can’t Help Falling in Love and Gillian Welch’s One More Dollar; recorded as a fragile duet with RMHQ favourite Rachel Harrington are both delivered as if they had been written on the morning of the recording.
One of the biggest surprises here is the rip-roaring Rocker Killer on the Radio, an ode to hearing Jerry Lee Lewis while driving; but we all have similar feelings when hearing other singers at different times in our younger life.
As with Disc#1 there are three songs that all could make ‘favourite track’ status; with the beautiful Drifting In and Out of Sleep touching a very raw nerve with me these days; and the Blued-Soul of Girl On The A-Train being a gorgeous love song with a swinging brass section; and quite unlike anything I’ve heard from Rill before. Imagine Bruce Springsteen covering Southside Johnny, if you will.
My favourite track this time is a song that in my opinion only Markus Rill could write and deliver without sounding twee; and that’s the final song Angel on the Stairs. Straight from the heart and brittle at it’s core but swathed in strings; and very easy on the ear.
But there’s an outright winner; and a song that plenty of people on Music Row would give their left arm to write. Eye For an Eye is a contemporary Country song about having a bit of luck in your life that allows you to grow up and leave town and live a good life; but for a quirk of fate you could be your childhood best friend who turns up on National TV News as a murderer.
Not Quite Simple Twist of Fate; but a simple story that is so complicated most of us can thank our lucky stars we are the singer of the song and not the subject.
I’ve said many times over the years that there’s no such thing as a ‘Great Double Album’ and thankfully for me, the way Markus Rill has set this fantastic set of songs out I can still pretend I’m right; but here I can’t think of a single song that shouldn’t have made the cut.
Markus Rill? Europe’s best kept musical secret.