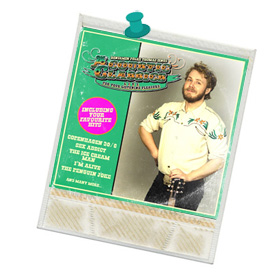 A Genuine One Man Show With Articulate Folk Songs and Lots of Laughs Too.

Everything about this release makes it a winner at RMHQ; as if I’d been browsing the racks in a record shop I’m 99% sure the cover would have attracted my attention even if I’d not heard and loved Ben Folk Thomas’s previous release COPENHAGEN; but primarily his wicked sense of humour in recording this Live album in his living room only with only himself and numerous overdubs of him cheering, laughing and even heckling himself as the singer is way beyond a brilliant concept!!
Let’s start at the beginning (a very good place to start!) I’m Alive; a rather brittle and beautiful love song that is brought to life by Ben’s rich singing voice and compelling guitar strumming.
Then we get the first story/introduction and it……sounds so…..’real’ as he explains the background to Good Friend Again from COPENHAGEN; and the song itself has gained a lot more gravitas sung ‘live’ as does the song named after his Grandfather Finn and the title track Copenhagen from that wonderful album.
Just as in his ‘real’ concerts, there are songs both old and new with jokes a ‘plenty in his introductions……corny jokes, but absolutely hilarious when you know the gag about the audience who howl with laughter.
The songs though are what we are here for and existing fans will thrill at hearing the darkly fragile Nothing Next To You and Woman I Love which juxtapose each other; and Folk music never sounded more interesting.
While I really, really love this album from start to finish; but two songs chiselled their way into my head the first time I heard them; partly because of their introductions; with the silver-tongued Sex , which closes the concert just losing out to Married which also is another good song; but made ‘great’ by the monologue which leads into a truly tremendous modern Folk song.
I’m normally not a lover of Live Albums, but ACOUSTIC CLASSICS, like the classic Compleat Tom Paxton from 1970 works on so many different levels and bares repeated listening; or at least it does in the RMHQ office and I think it will in your house too.