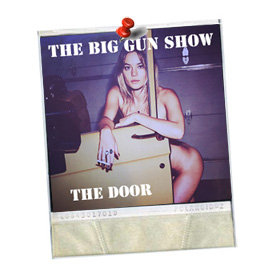 The Soundtrack To a Messy Friday Night.

Sadly some albums that are sent to us fall by the wayside and others sit around gathering dust before I get around to penning my magic words about them. This applies equally to the bigger names as well as the many DIY albums that cross my desk by the way.
Then, very occasionally something arrives that instantly piques my interest …sometimes it’s the artwork or Press Release (which rarely get read before the first listen) or in this case a handwritten letter that told me the band found our site via the Sarah Shook review and described their sound as ‘Keith Richards meets Ray Wylie Hubbard’……the sun was shining and there was nothing on the TV so I thought, I would give the 5 track EP a quick go.
YIKES!
Crashing guitars and a singer that sounds like he’s been living on cigarettes, beer and French Kisses since leaving the crib came billowing out of the office stereo; and when Gunter Woodson splutters “I got my Swagger back!” followed by some thumping hypnotic drumming I knew I was gonna love whatever followed.
The song itself, Swagger is the type of 80’s Rocker I loved from the likes of Thunder and The Quireboys……all tight jeans, sweaty t-shirts and Friday night drunken attitude……SWAGGER indeed.
Track #2 the raunchy ballad Begin to Begin slows things down; as Woodson sings straight into the eyes of ‘the hottest girl’ in the front row, making her go weak at the knees and making every fella in the room feel jealous and slightly inadequate.
Not a word I particularly like using, but Bitch is a snarling (unrequited) love song and the way he describes the young lady in question (“trouble in stereo”) I guess she is indeed a ‘Bitch’; but he keeps coming back for more…….we do, don’t we?
With a guitarist who owes a lot more to Slash or (my hero) Warner E Hodges than Keef and a singer who sounds like he’s been around the block at least twice and is now on his third trip, The Big Gun Show have a big, big ‘sloppy bar-band’ sound that only comes from knowing what you’re doing. This type of Rock n Roll just doesn’t get any better than the quaintly titled Chablis and Weed; which is a full-bodied Rock Ballad and will have the crowd swaying from side to side with their arms wound around their lovers or Best Buddies when played live.
The whiz-bang guitar that opens the final track Behind The Barn; coupled with some super-sweet pedal-steel reminds me of something else; but that’s for another day. Until then this cracking Country Rocker is easily my Favourite of the five; and certainly left me wanting MORE!
There are a million bands out there who sound a bit like this; but 99% of them are still playing Freebird and Satisfaction but The Big Gun Show have that extra ‘something’…..great original songs? A great singer? Super cool guitarist? An A* rhythm section? Whatever…..this EP is going straight into the car ready for the drive to work with my Cheap Sunglasses on; then for the drive home After Midnight when the roads are quiet and the engine will be loud.
It’s that type of music.