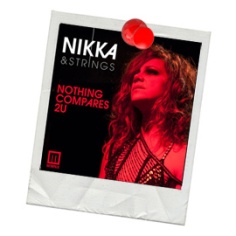 Nikka Costa
Nothing Compares 2U (Single)

Today; Friday March 24th sees the release of the first single “Nothing Compares 2 U” from the long awaited forthcoming album from American soul singer Nikka Costa – “Nikka & Strings, Underneath and In Between” which is due out later this year.

“Nothing Compares 2 U” showcases the lush production values of the album through Nikka’s personal and intimate interpretation of the classic Prince composition.

Says Nikka – “I’m really excited to have recorded the new album with a rhythm section and a string quartet!  I have some songs I’ve always wanted to record with this line up and make into a very special album featuring this music I love.  I grew up surrounded by orchestras and its music that is close to my heart.  The new album features some standards, some unexpected covers and some of my own new material written especially for this project!  I’m so excited!”