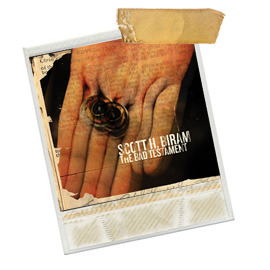 Red Raw and Blistered Country-Blues From The Pits of the Heart.

I only discovered Scott H Biram 3 or 4 years ago when a good friend too me to The Cluny to see an ‘un-named’ singer after making me promise not to check the listing guides.
Suffice to say John is a wise man and knows my musical tastes……..I was absolutely blown away that night. Very, very few solo singer-songwriters can silence that noisy bar but Biram’s powerful and passionate songs and indeed their ‘delivery’ did just that and the applause each received was deafening.
Can that ‘magic’ be transferred to disc?
The album opens with a crackling radio message before ‘the band’ (Biram plays EVERYTHING himself) kicks in with the muscular Set Me Free; a freewheeling Country Rocker to stir the soul of every sinner out there.
This is followed by Biram playing acoustic guitar and pouring his heart out on the cold-hearted Still Around, showcasing some incredible guitar picking too, btw. Normally these two songs would be like chalk and cheese; but like the rest of the album Biram neatly balances styles and moods like the pharmacist in Breaking Bad.
I had to look twice to see that the rusty love song Crippled & Crazy was actually Scott, as he sounds uncannily like Willie Nelson after a good night out. Red Wine is in a similar vein and is just perfect for playing on the jukebox at five minutes to closing time.
Biram plays his guitars with guts, gusto and guile but its his way with words that make him stand out; Righteous Ways is intricately clever and beautiful in equal measure while Long Old Time is a multi-layered slice of Country-Blues that will have you pressing ‘replay’ over and over again.
Suffice to say music like this isn’t for everyone…..”What the Hell was that?” said Mrs. Magpie as I played the fire and brimstone infused Train Wrecker at full blast just as she walked through the door! Imagine Lemmy and the Waco Brothers rediscovering Bo Diddley…….or Jason and the Scorchers on steroids! She didn’t like it btw.
Me? Love it to bits!
Just because he can, and just because he doesn’t give a damn Scott even includes a couple of Country stomping, grin inducing guitar instrumentals with Hit The River and What Doesn’t Kill You blowing that Seasick Steve out of the water!
At times Biram manages to put the Alternative into Alt. Country, with Long Old Time being the sort of harmonica soaked song you would normally associate with both Townes Van Zandt and Merle Haggard without ever sounding like either.
My favoured song here really is a singer-songwriter at the pinnacle of his career; Swift Driftin’ is one man and a guitar but just like that balmy night in Newcastle is spellbinding; and the way Biram growls “It takes a real piece of shit to be a real piece of shit/ You should really just be headed on your way.” Perhaps it’s just the mood I’m in, but that song really does speak to me.
I don’t really know Scott H Biram’s 9 album back catalogue; but I’m pretty damn confident that his fans (acolytes?) will think of this as some kind of masterpiece; and if it’s not his other albums must be amazing!