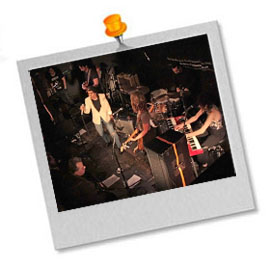 My New Year Resolution was to see more live music again; and already events have dictated that it’s been nearly three weeks before gig #1.
For those who’ve never visited The Cluny in Newcastle it’s an old Bonded Whisky Warehouse in the East of the city overlooking the tiny River Ouseburn, and split into two venues. Cluny 1 is the larger Hall and holds about 360-370 and Cluny 2, where my gig was holds 150-160. When I arrived 20 minutes early, for a change there wasn’t a parking space for half a mile or so; which is virtually unknown.
It turned out that not only was the Hurray For The Riff Raff gig Sold-Out but so was Martin Barre from the Jethro Tulls in Hall 1!
Hurray for live music!
The queue for HFTRR was actually up the stairs and outside the venue long before the doors opened, which was another first at this popular venue.
Hey ho; let’s talk about the actual gig should we?
Opening act local singer-songwriter Rhona Dalling, daughter of JHC regular Tim Dalling, at first appeared to be a strange choice; as she was more to the Folk end of the Roots spectrum; but songs like I Don’t Mind and the dark and melancholic How Do We Get Down; were all very well received by the already packed crowd.
By the time Alynda Lee Segarra and the other four members assembled by the side of the stage the atmosphere was genuinely ‘electric.’
Opening song Life Is Safe, was something of a slow burner, with Alynda looking as if she was as tight as a spring, making her distinctive voice sound both warm and fragile too.
The intense mood continued with the second song Nothing’s Gonna Change That Girl; from the forthcoming Navigator release. The ‘free-jazz’ vibe; a theme that came and went throughout the night took me a bit by surprise, but certainly wasn’t unpleasant.
As the applause shook the rafters Alynda took her huge semi-acoustic guitar off and proceeded to prowl the stage like a Hip-Hop tigress during a a wonderful re-interpretation of Daniella.
The blonde bass player; who was wearing a ‘Not My President’ t-shirt provided a very funky groove for another new song, the socio-political Rican Beach which was a lot punchier live than the sampler that the record company sent me.
From my vantage point in the VIP Section (ha, ha, ha) on the tiny balcony I could already see that the audience had split into two, with regular attendees who had seen the band several times before looking slightly baffled at the ‘new direction’ but the bulk of the crowd were already ‘into it’….and I was starting to err towards the latter too.
Even The Body Electric, from 2014 had a makeover and now had an almost Southern Gothic feel to it; mostly from the shimmering cymbals and powerful brushed drumming from the back of the stage.
Then; HFTRR dropped in the title track from The Navigator and bizarrely it was a return to the sweet Alt. Country Twang that we normally associate with this group, as was their ‘outlaw song’ Young Blood Blues; which feature some sublime bottle neck geetar from Jordan Hyde.
It would be wrong to say that it was a night of ‘ups and downs’ but there were definite mood-swings;
with oldie Blue Ridge Mountain actually bleeding into a fast and furious fan favourite Look Out Mama, during which pockets of shuffling/dancing broke out around the room.
Then; as if to confuse/challenge me even further Alyssa went ‘all Lucinda’ on closing songs Living in the City and the magnificent Pa’Lante ; again from the new album.
With nowhere really to go, the band had to push passed fans on the stairs beside the stage and disappear behind the curtain for 30 seconds before mysteriously re-appearing for their encore numbers!
The first of which St. Rock Blues found Alynda wrapped up as tight as a coiled spring again; but the band got their groove back and played their ‘Trump Card’ the night before the presidential inauguration, with a stomping cover of the Creedence song anti-Vietnam song Fortunate son with Alyssa actually snarling the lyrics.
What an interesting evening. Older fans of the rootsy HFTRR seemed more than a little confused on the way out; but the younger newer fans were beaming like beacons.
Me? I need to hear more of the new album and bigger, rockier sound before I commit.