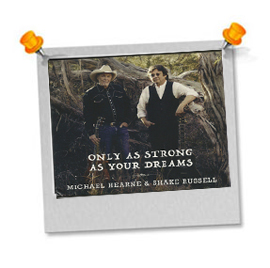 Laid Back Troubadours Strumming on a Porch.

I only discovered the delights of Michael Hearne’s music last week and now I can’t stop listening to this album with his long time friend and cohort Shake Russell.
By nature I prefer louder, punchier music but every so often I need to kick back and relax listening to good, old fashioned acoustic music; and it doesn’t get finer than this.
The Twangtastic I Got News For You opens the disc with Shake taking the lead and Michael and guitarist Don Richmond providing layer upon layer of harmonies. An up-tempo toe-tapping tune; by the standards of what follows and a wonderful way to start the record.
Michael Hearne follows with I Heart Texas, a soft and slightly ‘tongue in cheek’ ode to his home state, through the eyes and words of a weary musician who is down on his luck and returns home to sing Van Zandt and Guy Clark songs to ‘cowgirls who dance at old Gruene Hall, the Broken Spoke or at a Cowtown Ball,’ in a way too many musicians will feel is a familiar story.
During research for the previous album a song called The Girl Just Loves to Dance turned up on YouTube and instantly became a bit of a favourite; and it turns up here as a pleasing duet between Hearne and Russell, as an almost Hawaiian pedal-steel cuts through the waltz time tune like razor; making it a definite favourite at RMHQ.
Irish Prayer is a bit of an oddity as it is exactly that; with Hearne and Russell taking it in turns to lament over a maudlin Irish fiddle and some soft Celtic instruments in the background. It shouldn’t, but it fits in perfectly with the rest of the authentically Western acoustic songs.
By the time I got to You Make The Blues Feel Like a Sunny Day and This is What Happy Is; the penny dropped that, while neither singers are anything like him, but the tone and mood of this album takes me right back to the time I first discovered JJ Cale.
While the closing track Ballad of the Snow Leopard and the Tanqueray Cowboy may have a long and convoluted title; its a beautiful and deep song sung with grace and ease by Russell; with Hearne complimenting him with rich harmonies in the background.
And then there is the title track; a song that took me by surprise when I first heard it. Only As Strong As Your Dreams is exactly what the title suggests and the lyrics are both intelligent and beautiful in equal measures.
I’m sure Michael and Shake put an inordinate amount of time and effort into producing these songs; the end result sounds like a bunch of friends sitting around a front porch on a sunny Sunday afternoon just picking and singing for fun and beer.