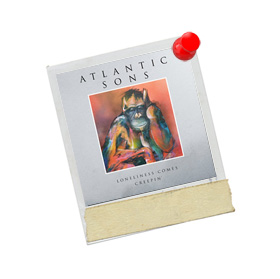 Cool Atmospheric Americana From the Clyde Delta via Harlem NYC.

This is another album that has sadly been lying gathering dust due to the deluge of CDs over the last few months. It was only when I received an e-mail from Scott Donaldson aka Atlantic Sons that I actually played it for the first time; and perhaps it was because the weather was unseasonably warm and sunny it was the perfect soundtrack for an afternoon drinking cold beer in the back garden.
The opening song Into The Arms of Mary initially baffled me; as I was expecting a cover of a similarly titled track…..but this is actually so, so much better.
Donaldson’s dreamy voice is perfectly complimented by David Mansfield on pedal-steel and Chris Palmaro on piano, as he takes us back to the heady days of Laurel Canyon in the early 1970’s.
That ‘feel’ continues throughout with well crafted songs like Illuminated and End of the Street evoking teenage memories of discovering Jackson Browne, Buffalo Springfield and the harmonies of CS&N. That said; this isn’t an actual homage to those years; it’s just how it makes me feel.

Caving In, is a little bit Left of Centre, a bit Springsteenian and a bit Socio-political, with Scott telling us about Jimmy who has no hope, so takes to stealing cars for joy-rides with a haunting chorus of “This is England Broke/This is England caving in” made even more listenable by some really stinging pedal-steel in the background.
Scott Donaldson can not only write exceptionally well, his production skills alongside Sammy Merendino are second to none; creating a ‘mood’ that brings out a true ‘team spirit’ from Donaldson’s high-falutin musical friends who never attempt to over shadow his voice and story telling.
While this is an album, in the old style, which just begs to be played on a good stereo system from start to finish; a couple of tracks really do stand out.
Track #2 She’s Leaving is a rare thing of timeless musical beauty, showcasing all of Donaldson’s skills and a backing troupe that are second to none in this day and age.
My actual favourite; and a song I’ve added to a couple of iPhone playlists is Just Like Jolene which closes the disc.
A tale of heartbreak made even more sublime by comparing the lady involved with Dolly’s Jolene…..and the result is truly excellent.
Scott Donaldson has been a travelling professional musician for 20 years, touring and recording with a pretty diverse bunch of musicians and bands across the globe; but judging by the quality exuded throughout this, his ‘debut album’ a successful career under his own guise, or as Atlantic Sons surely beckons.