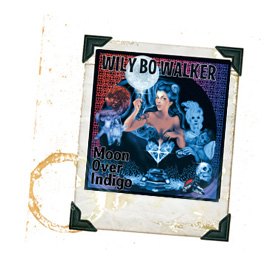 The Dark Side of the Blues That Will Chill Your Heart and Warm Your Soul.

At times I wish that Wily Bo Walker wasn’t quite so prolific with his recordings; then I could settle back and enjoy whatever appears to be his latest disc; but no….he keeps on churning out cracking albums that straddle the musical divide as if he has a home-made conveyor belt in the garage.
Moon Over Indigo is the third part of a musical trilogy first recorded in 2015 and; in my humble opinion by far the best thing he’s ever recorded.
I’m a stickler for an ear catching opening track; and Walker delivers a bit of a classic with Walking With The Devil (Voodoo Mix). A righteous slide guitar opens proceedings before Walker’s grizzled voice crawls out of the speakers, only to be followed by some sexy backing singers; and the mood is set for the next hour or so.
Track #3 Walk in Chinese Footsteps quickly takes a sharp left turn with the opening scary synthesiser and it’s no real surprise that Wily sounds more than a bit menacing as he growls over those sexy backing singers; but that’s the general idea. Easy listening this ain’t.
For a man so prolific; Wily Bo Walker somehow manages to maintain an exceptionally high quality standard with his songwriting; listen to the haunting New Orleans flavoured When The Angels Call Your Name or the languid and darkly beautiful For The Children to hear the words of a Master of his Craft. On the latter he skirts ‘politics’ with the couplets ‘Oh Angel/I’ve heard so many lies/But with the wars in the East/Corruption to the West/How the Hell are we ever gonna survive?’ all alongside the chorus ‘And who’ll be there to catch our dreams as they fall/Who’ll be there for the children when their nightmares call?’
Ooh; choosing a favourite is difficult as the album works as a ‘complete’ entity and should be listened to in one sitting; but if you twist my arm I will have to choose between the title track Moon Over Indigo; when Walker’s low growl and twisted words sound uncannily like something Tom Waits may have recorded around Nighthawks; then there is Jenny (Traces in my arms) when you are lulled into thinking Walker has a soft sensitive side; until you hear this beautiful ballad for the third or fourth time….and your eyes will pop out on stalks.
There are two well selected cover versions here. Walker not only takes a stab at Willie Dixon’s Same Thing, but he slices it into little pieces then hand sews it all together again until he makes it all his seedy own; and he closes the album with the dirtiest version of Who Do You Love you will ever hear.
Now I’ve played this on heavy rotation for a couple of days and nights; Moon Over Indigo is something akin to a modern day ‘concept album’….don’t fear; that’s only because the songs and the groove inter-link in a way that made me think this could easily be adapted into a kind of stage show; especially if you add the best of those two previous discs. For some reason I can envisage it being a darker Streetcar Named Desire meets Sunset Boulevard in the shitty party of town….but perhaps that’s just me!
Oh; the artwork on the album cover and more importantly throughout the accompanying lyric booklet all adds to the ‘mood and to some degree is a tattooists wet dream.