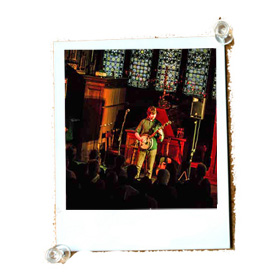 Folk music is becoming a bit of a regular thing with me these days – mainly more the mainstream faction but going back about six years ago the musician called Dan Walsh who performed at a variety show took me under his spell with his banjo magic. And that is what is was – magic – as he handled that banjo was simply spellbinding and since then I have tried my best to catch every show he plays when I am in the same city and his return to Newcastle on this tour saw him at The Mining Institute.

Local musician Simma opened the night’s proceedings with fellow musician Matt Johnson on guitar. We are told stories from his first meetings with Dan at open mic nights that he runs to stories leading into songs about drinking and living for the moment. The latter – The Time Of Your Life was very poignant as he tells us that many of us look back on the good old days when the good days are really now and we should embrace that.

After a mini break and time to take in the beautiful surroundings of this venue Dan tells us that he actually locked himself out of the building, but it is a relief he got back in as we witness his opening song Tune Set and get drawn into his banjo skills from the get-go. Stories are given to the majority of his set and like Simma, including ones of his time spent in Newcastle and reminiscing on the gigs he played on Simma’s nights at venues now long gone but there came a time when he had to leave to go back to his roots in Stafford which leads us to Time To Stay.

Dan is a natural storyteller and isn’t this what folk music is about? We have stories about his travels, as a musician to a hermit in Nova Scotia but most notably for me is Never Forget My Name, a cover of a band called Plumhall that he discovered playing a festival and powerfully performed by Dan. Another is Song Always Stays, which came about form his charity work with Live Music Now and is about Glen Mason, a former singer and actor who he met in a nursing home and as time went on Glen came to remember some of his own songs and Dan sings a powerful line to reflect that with, “I don’t know when I got here, It may have been a week ago or it may have been some years…but the song always stays.”

The night is not all doom and gloom as we have stories of him being noticed as a James Blunt look-alike, with one audience member saying that is why he seems to be at the wrong gig, to a roomful of laughter. There is the heart-warming story of how he came to play the banjo to the confusing acceptance of his parents to finding a music teacher specializing in banjo playing and tonight we even have Dan’s Year 6 music teacher in the audience. In the set there is also a song titled USA, which is about his dream of playing over in America and the confusing visa’s of trying to do so. In keeping with the happy mood and after an encore there is another cover song, with a nod to one of Dan’s biggest musical influences, which also influenced to the title of his latest release, ‘Incidents and Accidents.’ This also has a few audience members singing along with Paul Simon’s, ‘You Can Call Me Al.’
But seriously do not call him Al and do not confuse him with James Blunt as Dan Walsh, a master of the banjo (and also the guitar) is a true musician in his own right and will welcome you into the folk world of music if you are not already there.

One thought on “Dan Walsh – The Mining Institute, Newcastle”