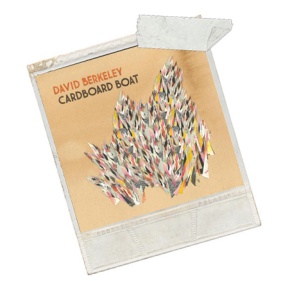 Engrossing Set of Grown Up Stories That You Can’t  Put In a Box.

Within 48 hrs. 2 copies of this album arrived on my doormat; one from a UK PR Company and the other his European distributor; so someone really, really wants me to listen to the contents.
The first thing I noticed (and liked) was Berkeley’s deep and rich voice; which has the capacity to to make even his simplest songs sound almost orchestral in depth.
Especially with a new artist; the first song on an album has to capture my attention and Setting Sail certainly does that. Bleak and almost miserable; but with some delicate guitar, percussion and trumpet in the background the singer instantly made me sit back and listen intently.
The songs on Cardboard Boat, are meant to accompany the songwriters book The Free Brontosaurus; with each song sung from the perspective of a character in the story. As I don’t have access to the book; I can assure you that that’s not an essential tool; as the songs here all speak for themselves.
Title track Cardboard Boat is as brittle as a Folk song gets; with Berkeley’s deep voice barely a whisper on a song that depicts loneliness in a very poetical manner. There are actually a host of instruments supporting the singer and Sara Watkins; whose harmonies are silky smooth; but all you really hear are their voices and a drumbeat that echoes a broken heart.
As an ‘Old Rocker’ I was intrigued to see if Wishing Well was a cover of the Free Classic; sadly for me it’s not. But in keeping with the tone of the rest of the album; it too is a desolate but beautiful song; that could feature on the soundtrack to any of those Norse Cop dramas on our TV’s these days.
For the second time in as many weeks; this is an album that takes me back to the Bedsit Singer-Songwriters of my teenage years; pouring out their hearts in songs that make the listener realise that it’s not just themselves suffering in silence. The quaintly titled Dinosaurs and Sages is a prime example; which conjours up images of a lank haired youth, in corduroy flares and a hand knitted pullover hunched over an acoustic guitar on the Old Grey Whistle Test; and me wishing that I was half as literate.
Nothing here is less than ‘pleasant’ with two tracks particularly standing out; To The Sea; a tale not unlike the Prodigal Son returning; but a lot more personal and at times, git wrenching.
The other is Hole in My Heart. I’m over it now; but there have been times lately when this song would have had me in floods of tears and learning the chorus like a Mantra.
Cardboard Boat; and indeed David Berkeley himself won’t be to everyone’s taste; but if you like your Folk infused Americana both windswept and interesting; this album is definitely for you.