This was another gig that I’d been looking forward to for months; primarily because Sugar and the Hi Lows were the opening act. Don’t get me wrong I really liked Kacey Musgraves Pageant Material album; but Amy Stroup and Trent Dabbs’ ‘supergroup’ Sugar and the Hi-Lows have been a family favourite for a couple of years.
The evening didn’t get off to a great start when my photo-pass had a restriction attached and I was only to shoot from the mixing-desk at the back of the room. Rules is rules; but I’ve never understood this one; especially as several people in the ‘pit’ had really good pocket cameras with zoom lens’ that could pick out the singers nasal hair.
Thankfully the floor manager saw my dilemma and secreted me about 1/3 of the way back for the headline act.
Hey ho.
I was thrilled to see Sugar and the Hi-Lows actually had a band with them; and what a hot band they were in their snazzy sports jackets, white shirts and black ties.
I was a tad disappointed to see the delectable Ms. Stroup wearing a big floppy hat, which masked her face but complimented her all black outfit; making her look like a Goth Stevie Nicks; especially when she played her tambourine.
Trent Dabbs on the other hand was resplendent in a suit; and he was particularly chatty between songs and even performed a soft shoe shuffle a couple of times, mid song.
Predominantly playing material from their second album High Roller; they soon had the excitable Kacey Musgraves in the palm of their hands. Even the quirky Bees Left The Trees were received well; but the title track High Roller and the excellent cover of Jackson both received whoops of delight mid song. I can’t wait to see them return soon; and I’m pretty sure they could fill either Hall 2 or the Cluny on the other side of the river without too much effort. 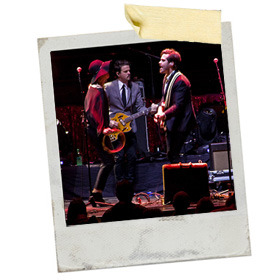 When I returned to the hall after the break the stage was now adorned with a pink backdrop and numerous spangly stars and glitter balls. With everyone in their seats the house lights went off completely as the band members made their way onto the stage lit up like Christmas trees. Their bright raspberry suits were decked out with fairy lights along every seam; much to the crowds’ delight. Although not lit up; Kacey Musgraves looked amazing in a pink taffeta rah-rah dress, spangly tights and white cowgirl boots.
Beaming with excitement the band got the hoe-down started with one of her signature tines Biscuits; which was greeted with screams from the scores of teenie fans and their Mothers too.
The last few bars were accompanied by the singer doing a bit of a dosey-doe dance.
After four songs Kacey misjudged the audience by playfully saying “ tonight isn’t the night for being reserved,” then playfully demanding everyone stand up. Most did; but there was noticeable grumbling around me; but a group of tiara wearing fans were in their element a few rows away. The ‘misjudgement’ was because while her songs are truly excellent; they are primarily for listening too and not necessarily dancing too; as was proved immediately that song ended and everyone sat straight back down. I’m not sure if this threw Ms Musgraves or what I think may have been monitor problems but she wasn’t nearly as chatty for the next few songs; and kept ‘looking daggers’ at the side of the stage.
That and the constant changing of guitars/banjos/mandolins in between songs that broke the flow were a relatively small price to pay when we got to hear great arrangements of This Town’s Too Small For Me, Family is Family and Dime Store Cowgirl; which had a really funny and touching introduction.
I actually recognised more songs than I expected; but one really deep Country song called Yellow left me baffled; until, on the way out a friend said he was surprised she had included a Coldplay song! Good on her, as it’s a great song and she did it justice.
After attending with an open-mind about the new ‘Saviour of Country Music’ I was genuinely impressed by her songs when sung live; and boy what a voice the girl has.
It’s difficult to pick out highlights; but her Grandma’s favourite song Fine; with its haunting pedal-steel was magical; and when she was left alone to sing Merry Go Round; it was a spellbinding four minutes; with the audience actually singing a verse and the chorus relatively in harmony.
When the band returned they eschewed their electric instruments to stand around the singer and eventually play a couple of acoustic songs; but interspersed with band members performing ‘party tricks.’ Much like the guitar changes; it spoilt the mood and the time could have been better utilized with an extra song.
Then the final song of the concert had the crowd spontaneously standing up and finally dancing; but that’s mostly because Nancy Sinatra’s These Boots Are Made For Walking was by far the most up-tempo song of the evening and the one that most fans will remember.

The encore saw the band gather around the Kacey and the mic to sing an acapella version of Roy Rogers’ Happy Trails Song.